ABATTOIR is Audrey Chen (cello & voice) and Robert van Heumen (laptop-instrument). Rooted in free improvisation and experimental electronics, they perform music where Chen's intense vocals and intricate cello playing are sampled, transformed and ripped apart by Van Heumen's vigorous laptop actions. Together, they are able to create a deeply sensitive communication infused with a boundless feeling of release and letting go.

From a review by Keir Neuringer, of a concert at STEIM where it all began:
"Devoted to not holding back when Chen performs, it was a pleasure to see her work so hard to match van Heumen’s often brutal digital transformations of her sound. There were several moments of pure psychedelia as van Heumen allowed untransposed, ungranulated repetitions of Chen’s voice to come through. I loved it when he took Chen’s keening voice and filtered it in such a way that, for a moment, it seemed that George Martin, the revered Beatles producer, had entered the room."

Hear the ABATTOIR album at Bandcamp.

Robert van Heumen is an electronic musician-composer using an extended laptop instrument to perform highly immersive and hyper-dynamic electro-acoustic music. As a musician, live sampling is his main tool. With a joystick and other tactile controllers, live sampled source sounds are gesturally manipulated and reworked within open ended narratives. Van Heumen is constantly searching for new strategies for live sampling and for the perfect balance between free improvisation and structured music. The laptop is used in an instrumental, tactile way, connecting action to sound like any acoustic instrument, and is used live as well as in the studio to generate sonic material for fixed-media works.
http://west28.nl 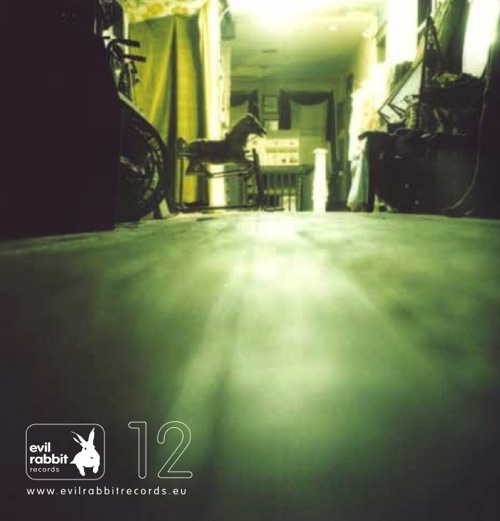 Do a Google Images search for Audrey Chen and you'll find some very attractive photos of the young Baltimore-based cellist / vocalist looking very demure and elegant. But in the company of laptopper Robert van Heumen – who's turned in some impressive releases this year, including Whistle Pig Saloon (with John Ferguson), one of the strongest outings yet on the insanely fecund Creative Sources imprint – it seems she can turn into a veritable harpy, her yelps, gargles, growls and squeaks ripped apart with carnivorous glee by van Heumen's electronics. Yes, the album (and group) name gives you some idea of what to expect, I suppose, from these six tracks – it's tempting to listen to it as some kind of pro-vegan Meat Is Murder horror story, with Chen playing the poor cow; but that would be overlooking the extraordinary sensitivity of much of this music. Van Heumen's treatments are often raw, even vicious, but never rough and haphazard, and there's a great feel for structure and timing to Abbatoir's music. And if you only know one version of "Endless Summer" (Christian Fennesz's of course), you owe it to yourself to check out Chen and van Heumen's track of the same name without further ado.


Baltimore-based Audrey Chen is one of the most notable of the young cellists and Abattoir, her duo with electronics manipulator Robert von Heumen, is a full round of beautiful playing and surprising turns. Chen's dexterity as both an instrumentalist and a vocalist is fairly striking and with both voices she moves easily between the pretty and the ugly, not always in tandem. The acoustic strings and singing voice give a very human feeling to the CD, only to be undermined by Van Heuman's live processing. In his hands, Chen's voice might start to develop an artificial sustain and within seconds be swirling like water down a drain. Fragments of her cello playing seem to be preserved and regurgitated as blipping percussion. At other times, the electronic elements separate themselves fully away from the acoustic, giving the odd sensation of an unstable duet, sometimes merging into a complex solo and then dividing again into two. The guttural sounds both favor at times might prove difficult to some listeners, but the five tracks here are endlessly inventive.


After an disquieting start, modulating on shrill guttural vocalizations and innervated with noisy and improvisational acts, Robert van Heumen intervenes on laptops and controller. He generates instrumental arrangements, selected by highly noisy drones, with supplemental clicks, hums, sudden changes of volume and various other audio events. The vocal evolutions of Audrey Chen are really extreme, as is - in a decidedly unconventional manner - her cello playing, which is also consistent with radical outcomes, channeling bristly and very imaginative audio convergences. Digital brutalism in free form, vehement expressions, heightened efforts, wailings and atonal lamentations are all performed with uninterrupted breathing techniques - the electronic manipulation is relentless, full of powerful distortions, melancholic melodies and experimental combinations. Authentic, intricate compositions, obviously not designed to please a mainstream audience, or to sit quietly in cautious research styles.


I am not familiar with Mr. Van Heumen who I believe is from the Netherlands where this disc was recorded, but I am a big fan of Baltimore-based improviser & sonic sorceress Audrey Chen. I've caught Ms. Chen on a number of occasions and heard her play an astonishing duo set with Tatsuya Nakatani last Sunday (1/31/10) at The Stone. I can't think of a more magical and transportative improv set that I've attended in ages. Audrey's approach to the cello and strange vocalizing are completely unique and utterly distinctive. For this disc Audrey is working with another sonic wizard and like-minded improviser named Robert Van Heumen. Right away on "Bloodknot" we know we are in for something special with layers of odd vocal sounds being manipulated and her cello droning suspensefully underneath. Van Heumen sounds like he is sampling the wind and/or altering static or quiet feedback. Ms. Chen uses her voice like instrument, bending and twisting it into all kinds of bizarre shapes. Each sound is carefully selected and occasionally manipulated so that nothing is as it seems. Sometimes that static erupts while different layers of vocal sounds enter from different places. There times when it if difficult to tell the vocals, cello and electronics apart since they are in a similar range and are equally brittle and consistently surprising. Considering that this disc is an hour long, I found myself tranfixed and often at the edge of my seat wondering how they were making all of these remarkable sounds and what would come next. Something incredible I assure you.


Wow. What a mighty blast this is. Robert van Heumen we know from his previous work in the field of laptops and improvisations while Audrey Chen on cello and vocals is a new name to me. Chen screams, whispers, mumbles, talks and sometimes she does that with her voice, but perhaps more with her cello. Its not easy to say that, as it seems that the laptop of Van Heumen is the overall controller of the sound. He too screams, whispers, mumbles and talks with the input given by Chen, and not always at the same time. Two worlds that collide and communicate. Van Heumen takes everything apart, melts them into bricks and builds a new house with it. Heavy duty improvised music, but 'silence' is word that they hardly seem to know here. From the very first to the very last second things erupt like volcano. Sometimes we are on top of that volcano, watching the eruption, then we see hot lava running down, slow but hot and powerful. This CD lasts about an hour, which seems quite long to me. It has a lot energy, this music, but it also exhausts the listener quite a bit. To give this your full attention is great, but you should be prepared for it. This music is not entertainment, a lazy laid-back recording, but it requires full, 100% attention. Perhaps to be taken in a smaller doses then as a large 5inch pill it is now. Play half, take a nap and then the rest. Its rewarding however.


(…) vocalist and cellist Audrey Chen and Robert van Heumen on laptop and controllers operate no less obstinate on the album ABATTOIR. A permanent analog, as well as digitally originated de-familiarized shrieking accompanies...... these recordings from the Amsterdam STEIM-music lab. In length between 6 to 13 minutes, Chen & Van Heumen leave the pieces enough time to develop from formal branching up to a universal structure. Especially nice is the shortest piece "Endless summer", which is probably influenced by colleague Fennesz.


Chen plays cello and makes vocal noises -- hard to judge her as a singer here in what is basically an unapologetic avant-noise album. Van Heumen is credited with laptop and controllers; also "selected, mixed, and mastered" so he has the last laugh. Chen is Chinese-American, b. 1976 near Chicago, is based in Baltimore. She has appeared on several other albums, only incidentally getting top billing here. Van Heumen's credit list goes back to 2000, but it's hard to tell how they shape up into albums. I tried following postclassical electronic music back in the 1970s when it was still relatively rare, but lost track in the 1980s, especially after Tom Johnson left the Village Voice. I imagine there's more stuff like this floating around, but just don't hear it. Strange sounds, lots of noise, a bit hard to take. Still, I don't find it as annoying as Merzbow or Lightning Bolt. I doubt that you'll like it, but I'm not sure I don't.


"They have performed together in various combinations before in Amsterdam and Chen’s home city of Baltimore, but this was their first duo. Chen played cello with more finesse than I have seen her do before. When I have seen her in the past she has employed the cello and electronics mainly as drone instruments, with her often primal vocalizations leading the performance. Tonight her voice fed hungrily and playfully off her capricious cello playing. Devoted to not holding back when she performs, it was a pleasure to see her working so hard to match van Heumen’s often brutal digital transformations of her sound. There were several moments of pure psychedelia as van Heumen allowed untransposed, ungranulated repetitions of Chen’s voice to come through—often considered dangerous territory in some circles but used here in good taste. Van Heumen tends to play forcefully and loudly, and tonight was no exception. However, I noted positively that his choices seemed to be more calculated and considered than usual, with less attention given to his joystick controller and more focus on subtle actions and longer-term transformations. I loved it when, halfway through the second of two extended pieces, he took Chen’s keening voice and filtered it in such a way that, for a moment, it seemed that George Martin, the revered Beatles producer, had entered the room."

Review by Keir Neuringer from a live concert at STEIM May 22, 2008. 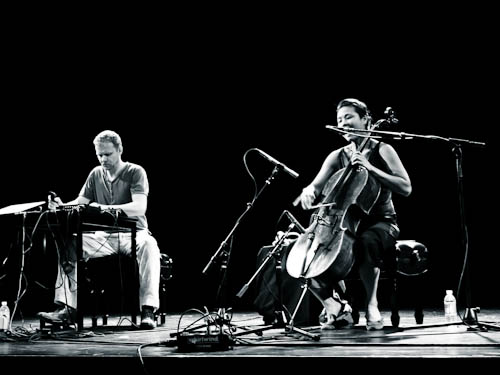 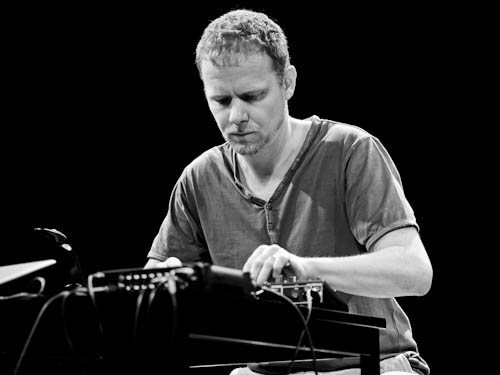 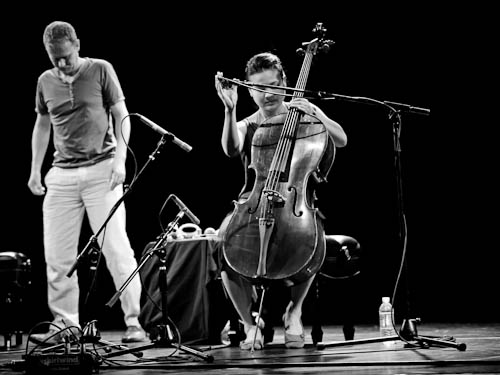 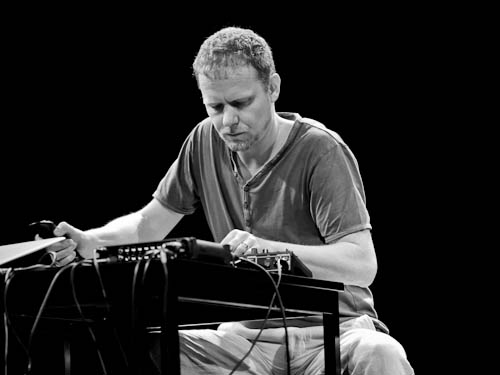 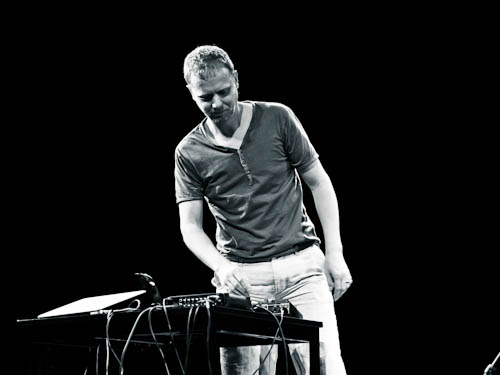 Same event as above, the full ABATTOIR set.


Selected ABATTOIR concerts in the past and future


To top
Fade to white