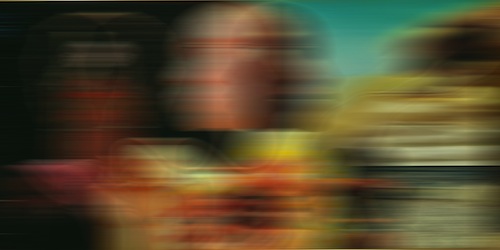 MDFreeze (13min08sec) is an algorithmic composition (*) for 8 speakers dealing with the perception of music in time. By taking snapshots of an existing piece of music at irregular intervals and freezing those snapshots, the regular flow of time is altered and a parallel version of the music is created. This process started as a futile attempt to capture a piece of music in a small number of frames, but of course fails utterly. Music is not about taking samples, but about what happens between the samples; about the transition from one sample to the other, differences in air pressure. In principal music is about the experience of sound in time and can never be caught in discrete snapshots. Countability versus the Continuum. And then: is this a ripoff? A remix? Or a new original work? This is for the listener to decide. The original music too was created by changing the regular flow of time, editing live performances together into one whole; revolutionary at that time and place. MDFreeze is inspired by Gas.

MDFreeze has a well-defined form and feel, but differs in details on every play. This creates even more room for discovery and surprise on the listener's side. Listen to one example of how it can sound below. Note that the composition is ment to be played through 8 speakers, so listening to it in stereo will obviously not create the same experience. Please use good quality speakers or headphones.


MDFreeze comes as a standalone application with a size of approx. 211MB. To run MDFreeze you need a Mac computer with OS X 10.6.8 or higher and preferably an 8-channel audio interface. There is also the option to play the composition in stereo, using for example the internal audio from the computer. It is available to anyone interested in hearing it. Send an email to robert[at]west28.nl for a download link.

MDFreeze had its premiere on August 16 & 17 2013 at the Museums Quartier in Vienna, as part of a Call & Response event in collaboration with Tonspur Wien. Other performances: MDFreeze is built in sound programming language SuperCollider. More information on the development of MDFreeze can be found on the Composition Stipend Blog.

Another MDFreeze rendition can be heard on Soundcloud.

(*) Algorithmic composition is the technique of using algorithms to create music. Algorithms (or, at the very least, formal sets of rules) have been used to compose music for centuries; the procedures used to plot voice-leading in Western counterpoint, for example, can often be reduced to algorithmic determinacy. The term is usually reserved, however, for the use of formal procedures to make music without human intervention, either through the introduction of chance procedures or the use of computers." (Wikipedia)
To top
Fade to white
To top | Fade to white