is a composition by Robert van Heumen for harp and live electronics, developed in collaboration with and performed by Miriam Overlach, with financial support from the Performing Arts Fund NL. A special version for harp, live electronics and voice was developed in collaboration with sound poet Sieger Baljon and director Nienke Rooijakkers for the theatrical concert To Whom this Power, performed at Orgelpark Amsterdam on November 28 2015.

SPILL is a musical response to fossil fuel disasters that often go unnoticed by the general public. In 5 miniatures Spill comments on ruthless oil companies, human tragedies and polluted environments. The processed harp is sometimes cold as ice, sometimes hot as giant flames that can be seen from 20 miles away. She cries, screams, explodes, gulps and rumbles. Placed in an electronically enhanced environment the harp is forced to adapt or fight fire with fire.

“While coal, oil, and gas are an integral part of everyday life around the world, 2013 brought a stark reminder of the inherent risk that comes with a fossil-fuel dependent world, with numerous pipeline spills, explosions, derailments, landslides, and the death of 20 coal miners in the U.S. Alone.” (Alternet)

Download the score and the SuperCollider stand-alone program to perform the piece. 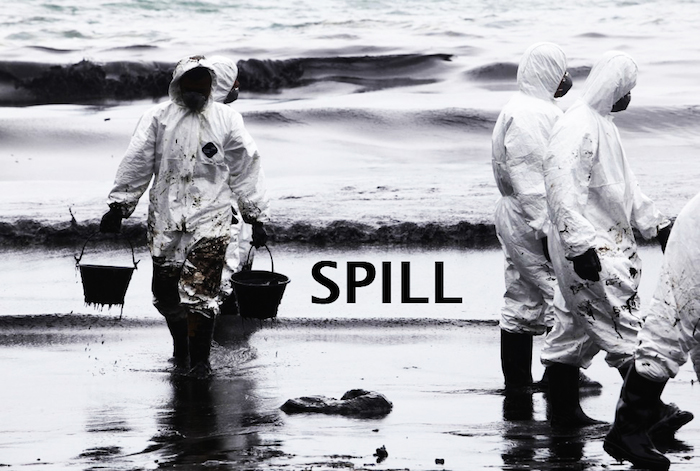 Listen to the full piece as performed on March 27 2016 at Splendor:

Watch the full composition as performed on March 27 2016 in the QuiosQue series at Splendor Amsterdam:

Listen to the full piece as performed on November 28 2015 at Orgelpark:

Watch to the full piece as performed on November 28 2015 at Orgelpark:

Below is a compilation video of the performance at the City Museum in 's-Hertogenbosch. Watch the full version here.