(music player)
To Whom this Power

To Whom this Power

is a theatrical concert for organ, flute, harp, laptop-instrument and narration. Robert van Heumen has created a full-length concert with five new works by three different composers. The theme is how we slowly but surely are ruining the earth's treasures. A concert about responsibility, guilt, the empowered and the powerless. With composer-performers Anne La Berge, Jacob Lekkerkerker and Miriam Overlach, sound poet Sieger Baljon and director Nienke Rooijakkers. 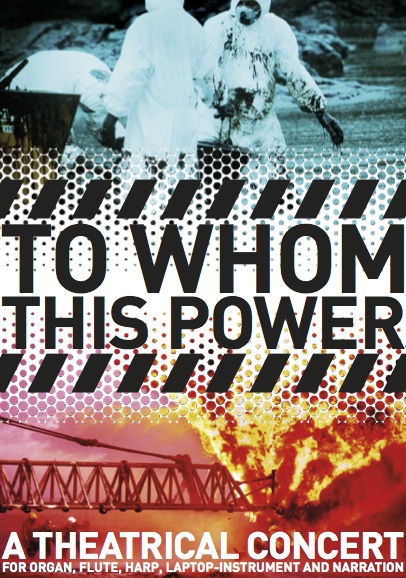 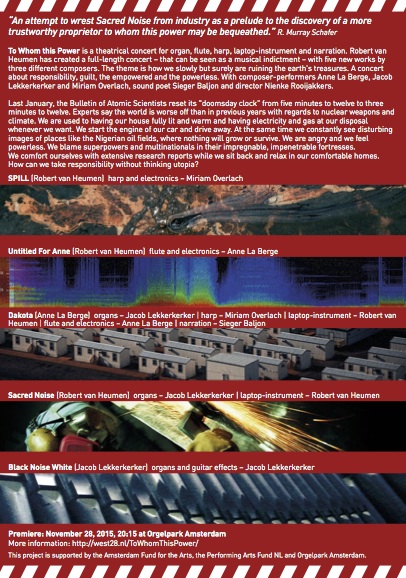 Last January, the Bulletin of Atomic Scientists reset its "doomsday clock" from five minutes to twelve to three minutes to twelve. Experts say the world is worse off than in previous years with regards to nuclear weapons and climate. We are used to having our house fully lit and warm and having electricity and gas at our disposal whenever we want. We start the engine of our car and drive away. At the same time we constantly see disturbing images of places like the Nigerian oil fields, where nothing will grow or survive. We are angry and we feel powerless. We blame superpowers and multinationals in their impregnable, impenetrable fortresses. We comfort ourselves with extensive research reports while we sit back and relax in our comfortable homes. How can we take responsibility without thinking utopia?

“An attempt to wrest Sacred Noise from industry as a prelude to the discovery of a more trustworthy proprietor to whom this power may be bequeathed.” R. Murray Schafer

This project is supported by the Amsterdam Fund for the Arts, the Performing Arts Fund NL and Orgelpark Amsterdam. Thanks to Clare Gallagher (sound) and Trevor Grahl (light).

SPILL (2015, 15’, Robert van Heumen) harp and live electronics: Miriam Overlach
SPILL is a musical response to fossil fuel disasters that often go unnoticed by the general public. In 5 miniatures Spill comments on ruthless oil companies, human tragedies and polluted environments. The processed harp is sometimes cold as ice, sometimes hot as giant flames that can be seen from 20 miles away. She cries, screams, explodes, gulps and rumbles. Each of these 5 miniatures is announced by a bang on an oil pipe and focusses on a specific extended harp technique. Placed in an electronically enhanced environment the harp is forced to adapt to the environment or fight against it.

Untitled For Anne* (2015, 10’, Robert van Heumen) flute and live electronics: Anne La Berge
Untitled for Anne is a game of power between the flute and the computer. The software is directly controlled by the acoustic input of the flute in an attempt to break down the traditional power of the electro-acoustic composer. Control is in the hands of the player, but the computer can take over if not restrained properly. The work consist of notated and improvised music with live processing and sampling of the flute. Untitled For Anne is an attempt to return the initiative to the performer.

Dakota* (2015, 10’, Anne La Berge) organs: Jacob Lekkerkerker | harp: Miriam Overlach | laptop-instrument: Robert van Heumen | flute and electronics: Anne La Berge | narration: Sieger Baljon
The North Dakota oil boom is an ongoing period of rapidly expanding oil extraction from the Bakken formation in the state of North Dakota. New technologies for horizontal drilling and hydraulic fracturing have opened up vast areas of land for drilling, turning this land into something very different than the farmland that it once was and forces us to consider the economic benefits against the environmental and cultural costs of an oil boom.
Dakota was happy.
Her beauty abundant.
Her honor was fragile
And later defiled.

Sacred Noise* (2015, 15’, Robert van Heumen) organs: Jacob Lekkerkerker | laptop-instrument: Robert van Heumen
Sacred Noise is a composition dealing with the seat of power in music that will include the issues of the acoustic versus the electronic, the performer versus the composer.
“An attempt to wrest Sacred Noise from industry as a prelude to the discovery of a more trustworthy proprietor to whom this power may be bequeathed.” (R. Murray Schafer).

* Premiered at Orgelpark
** Download the full text (in Dutch)

This is a compilation. Full videos of the compositions can be found at the Vimeo channel.