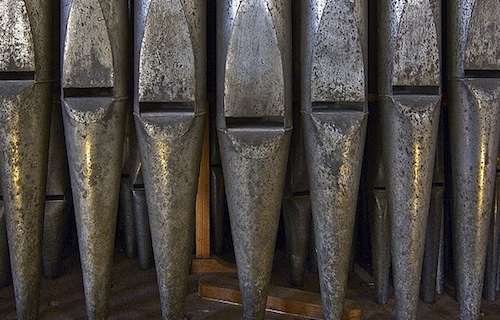 is a composition by Robert van Heumen for various amplified and distorted organs, flute with electronics and laptop-instrument, with a length of approx 25 minutes. During its premiere it was performed by Dominik Blum and Shackle (Anne La Berge & Deckard).

Tubes in Chains is about restricted tubes. Tubes in organs, the tube that is the flute, the sine tones inside the tubes. Restriction as in a technically limited expressiveness of the organs but also as a restriction forced upon improvisation. Tubes in Chains looks for ways for the organ to break free from its restrictions, to merge the acoustic with the electronic and to apply electronic extension to the organ like it is done with the flute.

This composition uses the Shackle System: a digital cueing systen that will regularly propose new musical sections to the players to play. The proposals will be displayed on an LCD screen visible to the players only. The length of the sections will be somewhat random: some sections will be a bit longer than others . There will be one 'conductor' who can interfere with the system to cancel propositions and to call up new proposals. Each new proposal is counted down in 15 seconds to allow the musicians time to prepare for the new section. The transition to the new section should happen at the count of zero or later. During countdown the current section should still be played. Transitions can be crossfades or hard cuts, this is up to the players. All sections will be played only once and in a specific order. The end will be proposed after the last section is played, which will be after approx 25 minutes.

Tubes in Chains is the next step in Shackle's research project into restriction and structure in electro-acoustic improvisation. For this installment 10 new musical sections were composed, each of which prescribes a way of playing the instruments or a limitation in sound material.

At the premiere on November 3 2013 in Orgelpark, four organs were used: the Sauer organ with its digital interface, the chest organ, the Molzer organ and the Verschueren organ. The list of composed musical sections: Some of these sections have written notes, some have specific directions, others are left completely open to the players to interpret. The full documentation can be found here.


Tubes in Chains was developed with financial support from the Performing Arts Fund NL. Many thanks to Dominik Blum, Anne La Berge and Nora Mulder for helping me out creating this piece.