Based in Amsterdam the Office-R(6) members originally come from Norway, the Netherlands, Turkey and the US. Among other experimental groups, they form part of the N Collective, "an international network of musicians, improvisers and composers" which "develop new music in the fields of improv, electronic music, noise, jazz, and contemporary music." The Office-R(6) members are all central figures in the N-Collective, being part of numerous groups such as TAPE THAT, Mayas/Nutters/Olsen/Galvez, USA/USB, SKIF and the latest signings to Rune Grammofon; MoHa! (Morten J. Olsen with Anders Hana of Jaga Jazzist, Noxagt, Ultralyd, Morthana).


Although Office-R(6) share many basic elements with other contemporary groups, their approach to performing and recording makes them unique, both in principle and in practice. All tracks are performed live and are, in essence, improvisations around a handful of structures. These preconceived structures act as the matrix onto which the material is skillfully laid to form a musical whole. An electro-acoustic unit, Office-R(6) manage, in this process, to initiate an interesting dialogue between the electronic and the acoustic part of their sound. Each member of the group uses its advanced skills to maintain an impressive accuracy throughout each piece, which results in an almost mathematically precise combination of acoustic improvisation, electronic textures and sound experimentation. This hyperactive collision of prepared and intuitive elements though does not rule out the human touch. Among the frantic explosions of tones, samples and textures, the various parts of this unorthodox orchestra momentarily unite in a short climax, only to fall apart in the next split second. This continuous musical charge and change of pace is the driving force behind the group's dynamics, marking a tour de force of both discipline and stamina.

Office-R(6)'s friendly experimentation is informed by many different chapters of musical history. From legendary acts like Evan Parker, MEV and Anthony Braxton to contemporaries John Zorn (Game Pieces) and the finnish Rauhan Orkesteri, the group's musical references cannot be pin-pointed to a singular source. Their sound is, instead in constant flux, kept together by the determination to explore the boundaries of structured improvisation and the fusion between the electronic and the acoustic in a non-restricted environment.

They make music which commands the listeners' most intimate attention. In the passing of just 10 minutes their sonic expression can range from conceptually stunning silences to gorgeous musical shapes to shattering raucousness and all the while they are seamlessly integrating the electronic and acoustic worlds with a touch usually only attributed to the masters of the trade."
Anne LaBerge 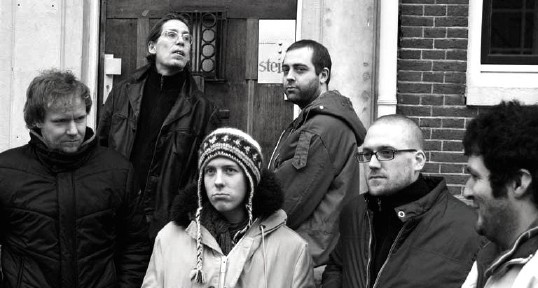 A sextet comprising Koen Nutters, Robert Van Heumen, Jeff Carey, Sakir Oguz, Dirk Bruinsma and Morten J. Olsen sharing mixed media (laptops, bass, reeds and percussion), Office-R(6) present us with vivid electroacoustic improvisations making good use of gaps and corners, mostly expressing a disconnected type of application which causes the music to expand its complex designs through a chronic alternance of short notes, concise phrases and not excessively extended deliberations. Multitudes of charmingly dignified timbres fit together without creating chaos, the sense of discipline is exceptionally developed, the whole sounding tight and controlled also when that’s probably not the case. More than resulting problematic at any cost according to a classic “look at how difficult we sound” attitude, Recording The Grain puts forth intelligent questions and gives itself the answers. Paradoxically, this is perhaps the only defect, in that the record lacks a measure of unexpectedness despite a considerable variety, appearing as surgically exact, meticulously intransigent, elegantly authoritative to these ears. The quality of the single voices is very high, though, and that alone makes listening an utter delight. A measured, but not parsimonious work which doesn’t contain the stigmata of momentousness yet – somehow - sounds astute, even seducing, no self-indulgence or vulgar impropriety in sight.


Spectral and textural, Recording the Grain is a kinetic performance by an electro-acoustic sextet that sonically interconnects while contrasting and juxtaposing light and dark timbres, staccato and languid tones and basso and strident pitches. The friction, echoes, recaps, puffs, twitters, snaps, buzzes and other sounds that result from this calculated interaction, take shape from the six players' contributions, which encompass backgrounds in improvised and notated acoustic and electronic music.

Dutch soprano and baritone saxophonist Dirk Bruinsma for instance, has been playing since the early 1980s in bands such as the Palinckx octet and with improvisers like bassist Barry Guy. Turkish, bass clarinetist Sakir Oguz Buyukberber participates in traditional projects on one hand, and on the other in improv formations with leaders such as conductor Butch Morris. Native of The Hague, bassist Koen Nutters is a founding member of the N Collective of which this CD is one production, and has played with Italian saxophonist/sound artist Alessando Bossetti. Stavanger-born percussionist Morton J Olsen has worked both with Bossetti and Norwegian saxophonist Frode Gjerstad. Managing director of Amsterdam's STEIM foundation, Robert van Heumen uses LiSa, STEIM's live sampling software with different controllers to mix environmental, found and created sounds. Meanwhile American Jeff Carey uses his laptop with SuperCollider in live performance and has taught at STEIM.

Watery signal processing and flowing static interpolations from both computers characterize "Available Sources (Ex 1)", the ensemble's 25 minute-plus concluding track, as well as much of the music that precedes it. While the liquid oscillations, whooshing flutters and knob-twisting scrapes help define the creation, so too do bass clarinet squeaks and chalumeau blowing; mouth-sucked reed, tongue slaps and key percussion from the saxophonist; plus xylophone pings and bell-tree rattling from the percussionist. Reed chirping and curvaceous whoops matched with resounding drum beats which boomerang back into the mix, finally reach a climax of intermingled timbres. Eventually, a lyrical bass clarinet run gives way to a coda featuring the other reed man's snapping tongue percussion plus the drummer's backbeat shifts and rebounds.

Variants of these strategies adumbrate through the earlier, briefer tracks. Overall, pointillist daubs of sound brush up against one another to make an ever-shifting aural canvas. Like a flashing neon sculpture, different aspects of the tunes are illuminated at different times. At one point you concentrate on signal-processed wave forms advancing in double counterpoint with moderato and adagio string bites; at another underlying fluttering and pulsating reed trills; at a third instance, snare rebounds and curt tongue slaps and growls making common cause. Ever so often individual ticks like clarinet yelps, woody bass thumps or buzzing ring-modulator clangs surface, only to lock into place within the overall Klangfarbenmelodie.

Contrapuntal layering of all these effects provides Office-R (6) with distinctiveness - an ever-shifting interface that negates minimalist austerity while clasping on to its hypnotic effects.

Recording the Grain plays like the soundtrack to an imaginary cartoon. An invisible menagerie of animals creep, shuffle, and chase each other wielding giant mallets and lightsabres across an equally-invisible landscape of mad-scientist's laboratories, rabbit holes, wide open plains and hissing and crackling power plants. Office-R(6) create a canvass of silence or very quiet drones and then punctuate this space with an array of atonal noises derived from both the unconventional use of traditional acoustic instrumentation and electronic sounds, treatments and manipulation provided by laptops. The structure of their music is highly non-linear and studiously avoids any sense of logical development or of obviously pressing the listeners' emotional buttons. There is a palpable sense of purpose to Recording the Grain, all six musicians seem intensely focussed on close listening and are highly restrained in their contributions. As hinted above, in many ways this recording sounds like an improvised take on the music of Warner Brothers composer Carl Stalling, filtered through the postmodernist sensibilities of Derek Bailey and John Zorn. The results are unsettling, but paint some rather wonderful primary-coloured pictures on the inside of one's head.


Office-R(6) is a sort of big band, in which North meets South and West meets East. Morten Olsen on percussion, Koen Nutters on bass and structure, Robert van Heumen on laptop (running LiSa), Jeff Carey on laptop (with Super Collider), Sakir Oguz on Buyukberber and bass clarinet and Dirk Bruinsma on soprano and baritone sax. These people work together in various combinations under the big banner of N-Collective. From what I gather from the information they operate in strict improvisation mood. It seems without any post editing. Acoustic and electronic meet up in a great way. A great way that needs a lot of concentration to fully grasp what they are doing, as this is certainly not easy listening music. Hectic, nervous, intense. Sometimes its hard to tell what is what around and that is something that is a great quality of this. Highly demanding and highly rewarding music. (FdW)


[...] the sextet Office-R(6) literally sculpt rather than play the music using acoustic instruments and computers yeilding a music that is sublty seismic and eminently contemporary [...] 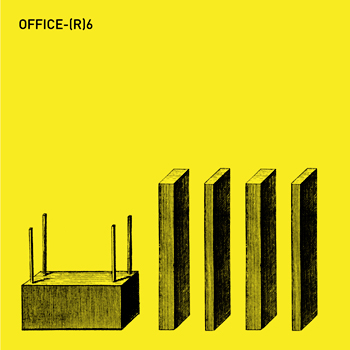 OfficeR / Mundane Occurrences and Presentations (LIGHT002) is for sale at Lampse.

Improvs can be unpredictable, a case in point Afternoon Tea, the 2000 Ritornell set produced by Oren Ambarchi, Christian Fennesz, Paul Gough, Peter Rehberg, and Keith Rowe. Despite the impressive lineup, the collective music-making underwhelms; with none of the esteemed participants intent on seizing control or imposing direction, the disc's two long and aimless pieces ultimately sound uninspired.

And then there's the Amsterdam-based Office-R(6), a sextet comprised of Koen Nutters (bass), Robert van Heumen (laptop), Jeff Carey (laptop), Sakir Oguz Buyukberber (bass clarinet), Dirk Bruinsma (soprano, baritone sax), and Morten Olsen (percussion) whose energized interplay is never anything less than engrossing. Drawing upon electronic music, noise, jazz, and contemporary music traditions, the players attack their gnotty electro-acoustic improvisations with rabid ferocity. The disc's purposeful, stop-start interplay is permeated by perpetual flux and invention with electronic sputter, bass clarinet growls, bowed scrapes, saxophone honks, and sliced voice samples endlessly circling around and colliding with one another. Sounds converge at some moments before splintering off into multiple directions the next. Mundane Occurrences and Presentations at times resembles the kind of challenging music Luciano Berio might be creating were he alive today and in his composing prime.

[...] They share a language based in European improvisation and free jazz, but with a completely new and contemporary approach, using electronics and concrete sounds with analogical instruments, using a non idiomatic language, exploring a vast number of sounds. They somehow remind me of some new age composers, if they had lived to the XXI and had been exposed to free jazz and noise and electronic music in their youth. Sound just runs, crashes, dives into a trouble sea. It's all is played live and it's for me one of the great Improv records of 2006.

Stabbed in the face

... discipline and precision are predominant here, giving the pieces the structured cohesiveness of composed music, though with a taste for breaking the flow in unexpected twists and turns. Energy fragments in all directions in a capricious game piece between acoustic texture and skilled electronic interaction, imbuing the music with the joyful energetic velocity that might remind you of the golden age of European Improv - think the robust language of contrasting colours and the 360-degrees-turnaround strategies of the likes of Paul Lovens, Peter Kowald, Wolfgang Fuchs or Even Parker. A highly palatable, invigoratlng and sophisticated appetizer of tradition and renewal, superbly performed and recorded.

Review in The Wire